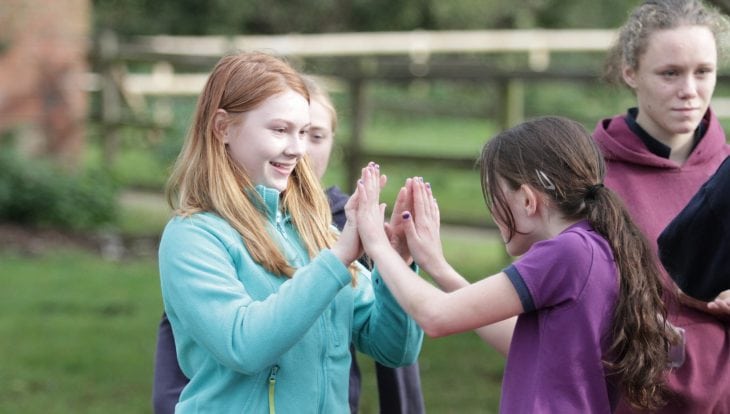 If people don’t know each other that well it can be difficult for conversations to flow and for people to feel fully at ease in a group – especially if they have just joined. These short exercises can be used if you have a lot of new Club members or to warm up for the main activity.

The group are going to be whisked off to a desert island in five minutes; each person is allowed to take three things with them. Give the group time to think and write these down, then ask each person to explain to the rest of the group what they have chosen and why.

After everyone has introduced their items, ask the group to work together to improve their chances of survival by choosing one item each to take.

A quick and easy exercise to warm up for the rest of the session. Select one person as the leader or “Captain” and they have to call out actions from the following list:

People lose if they get an action wrong until eventually there is just one person left who is the winner. This game is similar to Rock, Paper, Scissors but instead two teams act out one of three characters – Giants, Wizards or Elves. Split the group into two teams and go through the actions and noises associated with each character:

Giants. Stand on your tippy toes, raise your arms like a giant, and make a menacing growling noise: “Rarrr!”
Wizards. Crouch slightly, wave your fingers as though you’re casting a magical spell, and make a magical noise: “Shaazaam!”
Elves. Crouch down very low, cup your hands around your ears, and make a high pitched elf noise: “Eeeee!”

Explain that certain characters beat other ones (just like in when Rock beats Scissors, Paper beats Rock and Scissors beat Paper). In this game here’s who beats who:

Giants beat Elves, because Giants are able to “squash” Elves.
Elves beat Wizards because they outsmart them. Elves chew at their legs.
Wizards beat Giants because they are able to zap them with a magic spell.
If both teams show the same character, no one wins.

Ask everyone to practise each of the characters to make sure everybody knows the motions and sounds as well as knowing which characters beat which.

Split the group into two teams and ask them to stand at opposite ends of the room. Before each round, each team must huddle together and decide which character they are going to act out.

When everyone is ready both teams should face each other and after counting down from three each team should act out their character. As soon as they do this, whichever team is the winner is allowed to chase after those in the losing team, in order to gain as many new people on their side as they can. Losers retreat back to their own side to be safe for the next round.

Rounds keep repeating until one team wins – meaning that the other team is completely captured. Give each member of the group a postit and ask them to write three things about themselves which may or may not be known to the others in the group. Two points have to be true, one has to be false.

Go around the group and ask them to each read out their choice, the rest of the group have to decide which post they think is false. Ask everyone to partner up and find out three things about each other. Ideas for things they could find out include:

After a few minutes ask everyone to come together and ask each person report back what they’ve found out about their partner. If you have more time, continue by suggesting each person finds a new partner and find out three new things about that person.